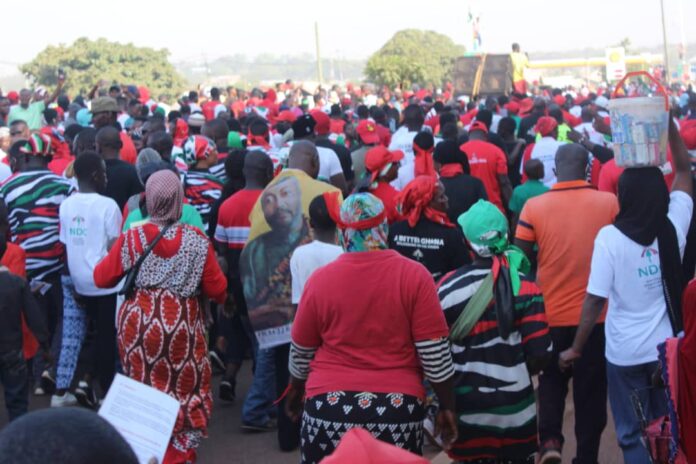 Thousands of NDC members in the Northern region embarked on a walk in honour of the late former president Jerry John Rawlings.

The walk which took place in the early hours of Saturday on the principal streets of Tamale is to pay respect to the fallen hero who died las week and to show appreciation of what he has done for Northern Ghana.

Clad in red and black, the vigil saw past and current members of parliament as well as former appointees in NDC administrations in attendance.

Addressing the public at the end of the march, Northern regional chairman of the NDC, Alhaji Ibrahim Mobila assured that the NDC will win all seats it lost in 2016 and claim additional ones from the NPP.

He believed that the current happenings in the country are indication that Ghanaians are fed up of NPP government and have learnt their lessons. Alhaji Mobila also said that “the rot and mess caused by the Nana Addo-led NPP government within a period of four years cannot be allowed to continue”.

He urged all members of the NDC to turn out on December 7 to vote for NDC Presidential candidate John Mahama and the NDC to rescue Ghana.

On his part, Parliamentary candidate for Tamale central and former Deputy Trade Minister, Ibrahim Mohammed Murtala touted the achievements of former President Rawlings in the North.

He mentioned road network, electricity, water and education as some of the major areas the late Rawlings developed in the North to enable it catch up with other regions in the south.

Murtala Mohammed also used the opportunity to appeal for a peaceful, free and fair election 2020.

He also sounded a word of caution to all those who intend to foment trouble on the day of election not to attempt so.

“We saw what this current NPP candidate in Tamale central did in 2016 and the simple message is that no one should attempt it again, and no one should think that they can foment trouble and go home and sleep free, it won’t happen, we want to have a very peaceful election.